The question, What is the meaning of life? is something that we ask ourselves at one point or another. It has been used as the basis for multiple films, but no movie has done it better than End of Evangelion. End of Evangelion serves as the ending of the 1995 animated series, Neon Genesis Evangelion, which is set in a dystopian 2014, in which monsters named Angels attack Earth. NERV, is an organization that uses teens as pilots to giant mechs to combat these Angels. The worlds population has been decimated due to an event known as 2nd Impact, and the series is set several years after this event. Shinji Ikari is ordered by his father, Gendo Ikari, to pilot one of these mechs called Evangelions. With such a silly premise, its hard not to imagine the series and its subsequent movie as nothing but action nonsense (which is what the remakes/sequels, named the Rebuilds, are), however it manages to rise above that. The series begins like that, but soon delves into the psyche of our characters and the downward spiral into madness of the protagonist, Shinji Ikari. The last two episodes were met with mixed responses; series creator, writer, and director Hideaki Anno received death threats in response. 2 years later, Anno released End of Evangelion. During the creation of Neon Genesis Evangelion, creator Hideaki Anno was in depression, due to multiple failures in his career in the anime industry. This mental state is reflected heavily in the characters, which is the strongest aspect of the series. Such a silly premise is held up due to the strength of the characters, all of which feel like real human beings. Every character in Neon Genesis Evangelion are fully fleshed out and have a pay off in the finale. Everyone is presented as normal in the beginning of the series are eventually revealed to have deeper flaws. Asuka is introduced as a confident, narcissistic girl who is revealed to have insecurities, a yearning to be mature, and a deep self loathing. Misato is a cheerful, older woman who in reality, sleeps around as it is her only way of knowing intimacy. And so on and so forth. I have never watched anything else with such deep and profound characters found in Evangelion. Many of them reflect our own inner turmoil, in a way, making it harder to watch. End of Evangelion is most famous, or perhaps infamous, for its ending 3rd act, of which can only be described as a mindfuck. It begins to go off the rails and it is easy to get lost upon a first viewing of it (even upon multiple viewings it can still lose a viewer), but this is what makes it all the better. Like our protagonist, we are sent on a downward spiral into madness, viewing it with wide, horrified eyes. And when the ending plays out with us, we are left contemplating what we have just witnessed. End of Evangelion is a masterpiece and my favorite movie of all time.

When people say a film is character driven, they are more than likely describing a movie that is a character study. No movie has ever studied a character better than Martin Scorseses 1976 masterpiece, Taxi Driver. Taxi Driver is a hypnotic, nightmarish experience that chronicles Travis Bickles, a Vietnam war vet, descent into madness. Taxi Driver was penned by Paul Schrader who had stated that it was quasi-autobiographical as he shared many similarities with the character of Travis Bickle. Bickle is a lonely man who drives cabs at night and narrates his hatred of the scum that inhabit the city of New York. Robert De Niro elevates the material given to him. The audience can feel the loneliness and the self loathing that ooze off of Travis. His desolate stare and his desperate actions in hopes of being accepted and fitting into society feel all too real. The famous improv scene of, “You talking to me?” perfectly describe the film. Travis in a lot of ways is us, our need for belonging, our feelings of loneliness, and our own frustrations with oneself is a mirror. How he chooses to express this in the violent end represents something that we could be, should we choose and fall down the slippery slope that Travis does. Many audiences praise Travis’s decision in the end, without realizing that such an act of vigilantism is condemned by the film. By the films end, Travis chooses not look in his own eyes, as he briefly saw the monster that lurks between his own eyes. Martin Scorsese burst out onto the scene with Mean Streets and his turn in Taxi Driver had cemented his brilliance as a filmmaker early in his career. Scorsese directs this film as if it was a horror film. The opening shot of the cab emerging from the smoke and a haunting score would be typical in a horror movie. Many of the shots of New York are highly contrasted, leaving dark black backgrounds which suit our character’s viewpoint of the world. Travis refuses to see the light/good in the world, only focusing on the bleaker, darker parts of humanity. It is essentially a first pov character study, from the pov of a madman, yet Scorsese is able to encapsulate many audiences own inner feelings and make Travis a sympathetic, yet terrifying character to watch. Never has a film been able to capture loneliness and self loathing on screen (until Neon Genesis Evangelion and its finale came along). Taxi Driver reflects all of us and our turmoils in daily life. In a long, successful career for both Robert De Niro and Martin Scorsese, Taxi Driver remains their best work and my personal favorite of both of their works. 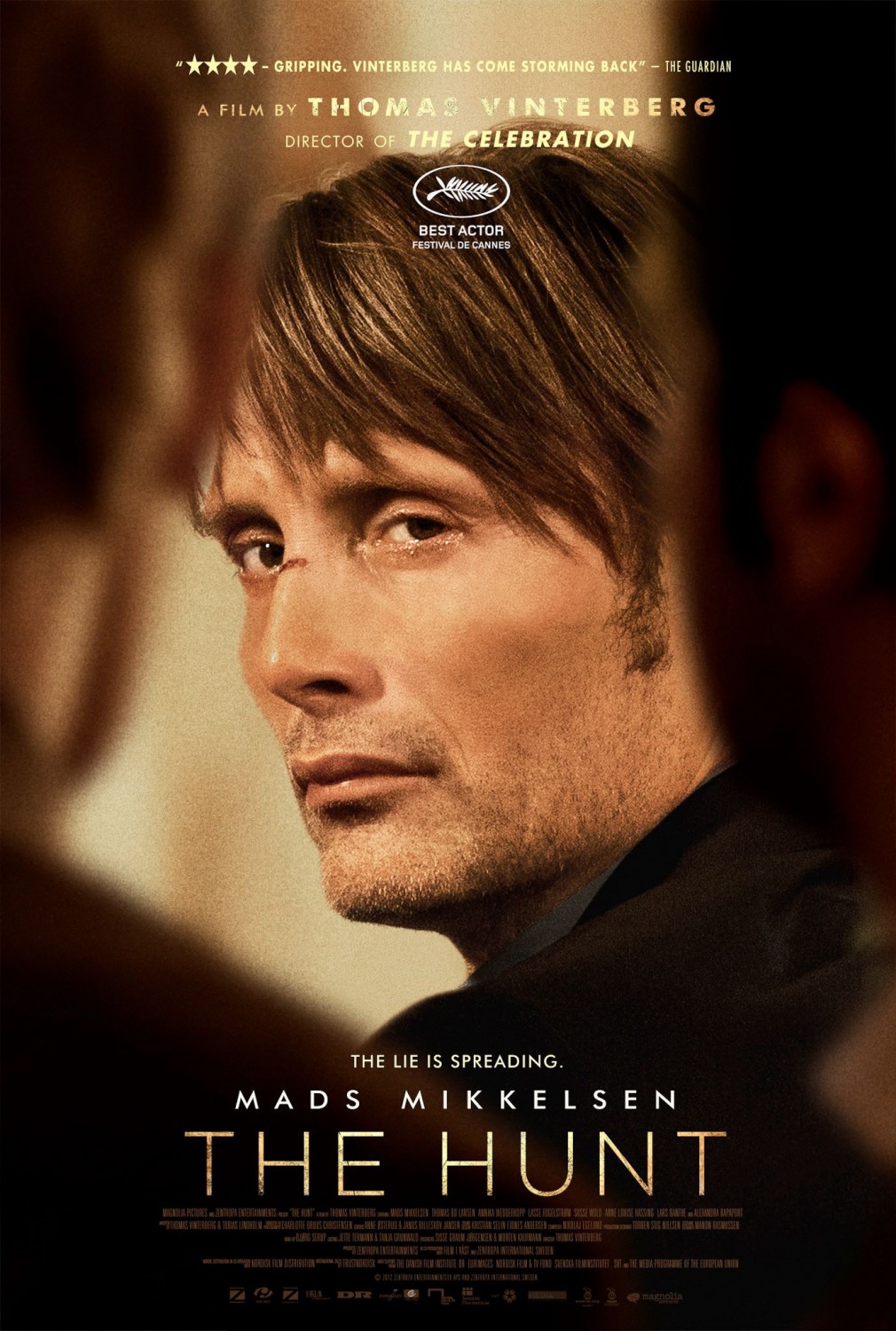 The premise of mass hysteria is not something uncommon in film. Its a subplot that is often used in sci-fi and horror films, and horror is something that would perfectly describe the 2012 Danish film, The Hunt. The Hunt tells the story of a kindergarten teacher who is subject to mass hysteria in a small town after being falsely accused of sexually abusing of his students. Lucas(played by Mads Mikkelson) is a well liked kindergarten teacher who is divorced and is in another relationship. After refuting a kiss from one of his students, she inadvertently implies that Lucas had sexually abused her after recalling being shown a pornographic image by her older brother. This leads to Lucas to be under severe scrutiny from the small town. Mads Mikkelsen as Lucas is nothing short of brilliant in the role. His sympathetic pleas and almost pathetic, mild mannered ways make for an all too sad character to watch suffer at the hands of those he had considered friends. Mikkelson’s posture and gazes make for an uncomfortably real look at how mob mentality can destroy one’s life. His relationships become strained and the audience can see the toll it takes on Lucas. The dangers of false accusations and mob mentality is made into something terrifying under the hands of director Thomas Vinterberg. Multiple close ups are used, creating a sense of claustrophobia, as if the world is closing in on Lucas, and there isn’t much he can do about it. Vinterberg encompasses a fear of being misunderstood and mistaken in such a unique way. His ability to create a pseudo horror film in a drama is mesmerizing. The Hunt provides an unflinching look on the slippery slope of mob mentality. Mads Mikkelsen turns in a career defining performance, showing off how versatile and how much range he has. It is a powerful film that leaves a lasting impression.

Eternal Sunshine of the Spotless Mind 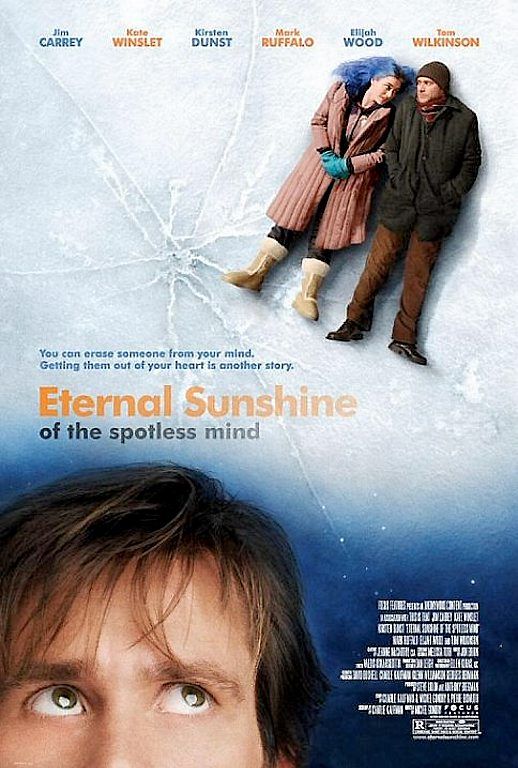 Have you ever experienced something painful and wished that you never remembered it? Eternal Sunshine of the Spotless Mind deals with this concept. The movie looks at Joel who had received a letter that his ex, Clementine, has erased memories of their relationship. In anger and retaliation, Joel decides to erase memories of their relationship as well. As the process of his memories are being erased, Joel reflects upon their relationship. Eternal Sunshine of the Spotless Mind is penned by Charlie Kaufman, known for creating such weird sci-fi premises, yet grounded characters and this film is no different. The characters of Joel and Clementine and their relationship feel authentic. Their banter, their hardships, and their eventual breakup feels as if that would happen in real life and Jim Carrey and Kate Winslet who play the two respectively perfectly capture Kaufman’s work. Their chemistry and their then lack of chemistry is endearing to watch. The joy of entering and being in a romantic relationship as well as the pain of ending said relationship is perfectly reflected by the two leads. Jim Carrey is the standout, giving another fantastic performance that was snubbed by the academy (snubbed for Man on the Moon and The Truman Show). His pain and regret with getting his memory erased easily pulls at the heartstrings of the audience, in a non manipulative fashion, wisely letting Carrey emote. Eternal Sunshine of the Spotless Mind asks whether it is better to live with the pain of letting one go, but remembering the good times or to forget both the good and the bad. The film advocates the former. The film is one of the best romance films I have ever seen, and still gets tears in my eyes even after repeat viewings. It is one of the best films of the 2000s.

Often described as the Citizen Kane of bad movies, The Room has exploded in a cult following for good reason. Watching this film is like watching a train wreck, you want to avert your eyes but you just can’t. The Room is theoretically a drama film that tells the story of Johnny and his unfaithful fiance Lisa, who cheats on him with his best friend Mark. Directed, written, produced, and starring Tommy Wiseau, The Room is as confusing as its creator. As one watches the film, its hard to not be amazed with the images coming on screen. Shots that take place outside are clearly shot in a cramped set, as the actors quizzically play football. Sex scenes are cut and edited to shit as it is clear that the actors aren’t even near each other. This is due to Juliette Danielle(the actress who plays Lisa) refusing to shoot any more sex scenes as she felt uncomfortable after shooting one with Tommy Wiseau (who played Johnny). There are multiple shots that are clearly green screen. Many subplots are introduced (Lisa’s mother has breast cancer, Danny owes money to a drug dealer, etc.) but never explained and resolved. Much of the dialogue is terrible to begin with, and it is delivered in horrifyingly awful fashion. All of this sounds like a shitty movie, which The Room is, but it makes for one of the best comedies of all time. The acting absolutely atrocious as many actors are not in sync with each other’s line, creating a head scratching experience. This is most evident in the flower shop scene. Stiff and robotic acting is highlighted in the editing room as sudden cuts to actors give the film an extra layer of confusing. The Room is one of my favorite movies for how bad it is. It is terrible on all levels, but manages to be so hilarious. I maintain that it is my favorite comedy as no movie has made me laugh that hard (maybe The Happening). It truly is a movie that one has to experience to understand just how wrong it is. Fun fact, the character of Mark was named by Tommy Wiseau after his favorite actor, Matt Damon.